If you aren’t a part of the 4.5 million Americans that get bitten by dogs each year, you’re not off the hook. You can still feel the consequences of dog bites in the form of rising home insurance premiums.

So how common are dog attacks? Is there a dog breed that bites more than others? And which state has the most dog bites reported?

In this article, we’ll explore these questions so you and your family can avoid being a part of these statistics.

What breed of dog has the most bites per year?

According to a study done by the American Animal Hospital Association(AAHA), pit bulls, mixed breeds and German shepherds were the top three breeds responsible for the highest percentage of reported dog bites per year.

Out of the three, pit bulls have the highest percentage of reported bites at 22.5 percent, followed by mixed breeds at 21.2 percent, and finally German shepherds at 17.8 percent.

Additional factors that were included were head shape and weight. Dogs with shorter, wider heads who weighed between 66 and 100 pounds were found the most likely to bite.

Based on the PPP (Perros Potencialmente Peligrosos i.e Potentially Dangerous Dogs) list, Pitbulls were responsible for 3,397 attacks and 296 deaths in 2021.

Now, Pitbulls may be the most feared and plagued with the worst reputation, and the statistics don’t lie, but that doesn’t mean the breed is to blame.

Their territorial and aggressive behavior can be linked to the way they’ve been known to be bred and raised, and the trauma that comes with it.

What state has the most dog bites?

This is likely due to California’s high population density; there are simply more people and more dogs in close proximity to one another. 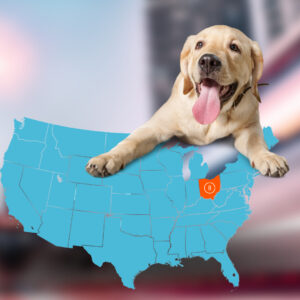 Dog Bite Stats in the State of Ohio

Ohio law states that dogs that have a bite history are considered vicious. As a result, their owners must carry at least $100,000 of liability insurance.

One way to decrease the chance of your dog biting someone is to make sure they get regular exercise. State Farm recommends taking your dog on walks and providing them with mental stimulation through activities like training.

Dogs are the people’s pet, and we all want our four-legged friends to live happy, healthy lives. By being a responsible dog owner, you can help keep yourself, your pet and others safe.

If you’ve been bitten by a dog, have a dog bite infection or need dog bite treatment through legal means, contact Sandel Law Firm for a FREE consultation today!

Kevin Sandel is a dog bite lawyer that’ll get you the compensation you deserve.